Vaping loose leaf material is a whole hell of a lot different than vaping e-liquid. It’s only comparable because they both are technically considered vaping. Just like with e-liquid, there’s no combustion when vaping dry herbs. The loose leaf is heated up to the point of vaporization, which is what makes it a vaporizer. 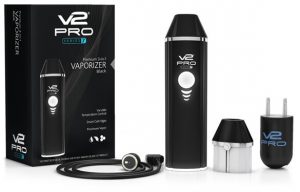 I know, that sounds like common sense, but it’s not. Not everyone knows what a vaporizer is, including some vapor companies. I’ve personally used vape pens that obliterated the loose leaf material and combusted it, something you don’t have to worry about with a good desktop unit.

Poor design and low-quality vaporizers are something I do not recommend. Now let’s get into it and talk about the best vape pen for dry herb on the market today. 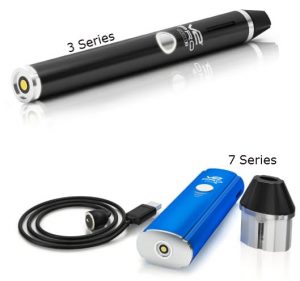 The 7 Series is a badass vape pen that was designed specifically for dry herb vaping. Yes, that’s right. It is the successor of the wildly popular 3 Series. When you search around the web, you’ll still see the 3 Series touted as the best dry herb vaporizer pen. Those must be from older articles or have price restrictions because the 7 Series blows it out of the water.

As mentioned above, the 7 Series is a 3-in-one pen that was specifically designed for dry herb. The other two cartridges are compatible with e-liquid/oil concentrate and wax. The e-liquid cartridge has a 2.5mL capacity and three power settings. You can vape on it at 3.7V, 4.2V, or 4.7V.

This vape pen has an awesome battery, coming in at 1,800mAh. Vaping dry leaf is different than vaping e-liquid. You can vape on e-liquid all day long, but that’s not the case with dry leaf. You can use a dry herb vape all day, but they pack a punch so you won’t need to take as many drags on one.

With the 1,800mAh battery in this pen, it’ll last you for days on a single charge whereas other pens won’t last a whole day. 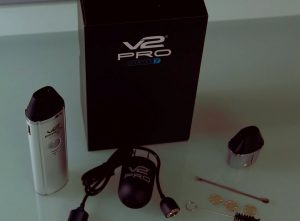 The 7 series has a nice big chamber that holds the dry herb. It’s 1300mm³. That’s enough for you to fit a good amount of your favorite dry herb. It has three different temperature settings. The three LED lights on the front indicate the chamber temperature. It ranges from

The 7 Series is the best performing dry herb vaporizer pen on the market. There are table top vaporizers that are better, but this is the best pen. Its build quality is top notch and it feels very durable. It produces a nice and consistent vapor that isn’t harsh like smoke.

You feel the effects of the vapor almost immediately and it lasts a long time. Vaping with this pen is different that smoking as it produces a cleaner vibe. It’s nice gives off a very nice feeling and won’t combust your dry leaf. It’s a high-end device and performs like it. 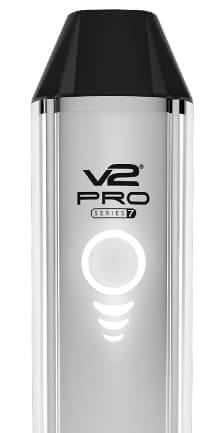 The biggest downside to this pen is the price. It costs $129.99. It’s worth every penny, but I know not everyone can afford it. I hope that you can afford it because it is a really solid device that you’ll enjoy. If you can’t afford it, I recommend it’s predecessor, the 3 Series pen.

It is just like the 7 Series but smaller and less powerful. It has a 650mAh battery and a 385mm³ chamber. It vapes between 160ºC and 180ºC. It’s a nice pen, especially if you’re on a budget. The 3 Series pen only costs $59.99, less than half of the prices of the 7 Series. If you’re just looking for a pen that works, I recommend that you buy the 3 Series. But if you want the best vape pen for

The 3 Series pen only costs $59.99, less than half of the prices of the 7 Series. If you’re just looking for a good pen that works, I recommend that you buy the 3 Series. But if you want the best vape pen for dry herb that exists, then you should buy the 7 Series no doubt.