Every vaper had to start somewhere, and for a lot of us, that was with an eGo vape pen.

It just makes sense to start there. Spending hundreds of dollars on a nice box mod kit just doesn’t make sense when you’re just getting into vaping. An eGo device is the perfect segway into the vaping scene. They’re cheap, reliable, and get the job done. If you’re looking to get into vaping or upgrade from an e-cig, an eGo vape pen starter kit is a great choice. Below I’ve listed one of, if not the best pen for you to start with. 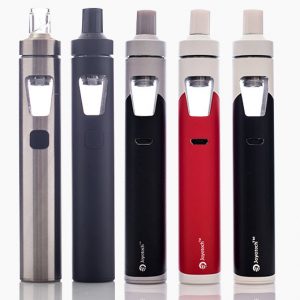 The eGo AIO is a complete starter kit that will get you vaping right away. You don’t need any prior experience or specialized knowledge to use it. However, you do need four skills. You need to be able to charge the device, fill it with vape juice, press the firing button, and inhale. That’s it.

One of the biggest inconveniences with eGo pens is the battery. They usually have low capacity batteries that won’t last a whole day. The typical size is 650mAh, which is very small in the vaping world.

You shouldn’t shy away from a small battery unless your lifestyle demands a bigger battery. Low capacity batteries have one perk, they’re small. Other than that, getting a mid-range battery is the best option. They’re not too big but they have a great battery life.

The eGo AIO pen has just that, a mid range battery. The battery capacity is 1500mAh on this bad boy. That will last the casual vaper all day. If you’re a heavy hitter, it won’t last all day but it’ll come close.

The tank size on the AIO eGo pen is right in the middle. It comes in at 2mL, which is a great size for your first pen. It’s not too small & not too big. As you learn more about your specific vaping style, you’ll be able to better choose your next tank capacity or buy several tanks. Right now, 2mL is just about perfect.

As you find out which e-juices you fancy, you’ll want a bigger tank. Being able to put half a bottle in one tank is convenient when you find your favorite vape juice. You don’t want a tank full of e-liquid that you end up not liking much. It’s easier to have a small tank at first for that very reason. Not to mention the size is convenient.

A 2mL tank is easy to carry and transport. I wouldn’t recommend getting a big bulging tank until you’ve figured learned how you like to transport your vape or if you’re an at home vaper. I have certain vapes that I generally keep at home and others that I carry with me. Usually, the bigger ones stay at home unless I want to show it to a vaping buddy. 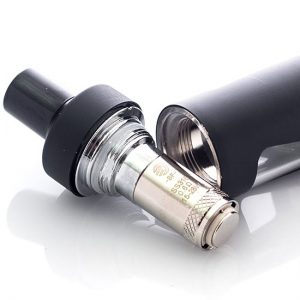 Everyone has their preference when it comes to top or bottom filling tanks, but most prefer top filling tanks. If you’re not sure what that is, I’ll explain.

There is either an opening on the bottom or the whole base can be removed. Since the eGo AIO’s tank is built into the base of the pen, it only makes sense for it to be a top filling tank. Top filling tanks are well received by the vaping community. They spill less and are easier to fill. Bottom filling tanks are notorious for being messy and leaky.

Again, no worries with this eGo pen. It’s a top filler and is virtually spill proof with the unibody design.

One thing that often gets overlooked is the mouthpiece, more commonly known as the “drip tip.” Most drip tips are made out of varying types of metal. These can heat up and become uncomfortable. Well, you don’t have to worry about that with this eGo starter pen.

The eGo AIO sports a glass drip tip. These don’t heat up as fast as the metal drip tips. You won’t have to worry about going to take a drag on a hot drip tip, which is very uncomfortable. I’ve never heard of anyone actually getting burned by their drip tip, but plenty of people complain about the discomfort. 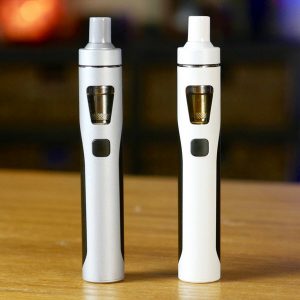 The most important thing to be conscious of when vaping is safety. I don’t care how “good” a pen is if it’s not safe to use. Nothing else matters if your safety is at risk. Some vaping devices don’t have any safety features. These are called mechanical or unregulated devices.

The eGo AIO pen is not one of those. It comes with a plethora of safety features.It’s equipped with over-charge protection which is good for those of us who charge our eGo pens overnight. Also, it comes with rapid discharge protection. This keeps you from draining the battery too much and too fast. If that were to happen, your battery could malfunction or explode. You won’t have to worry about that with this pen. The chip regulates the current and will automatically stop it from happening.

The chip regulates the current and will automatically stop it from happening. It also has over current protection which will keep the battery from sending too much current. Think of it as a built-in circuit breaker that you never have to reset.

You don’t have much to worry about with this pen, but it’s still smart to take safety precautions. Don’t leave it on the charger for days at a time. The pen will be fine, but that’s a bad habit that you don’t want to start. It could bite you in the butt later down the road when you start using more advanced devices. Just be responsible with your pen and you’ll have nothing to worry about.

Why I Love This Pen 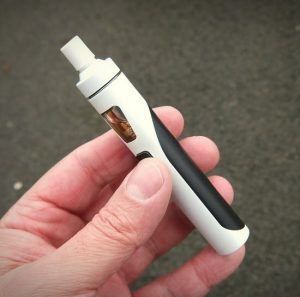 I love the eGo AIO because it’s very beginner friendly and you have to love the price. It’s one of the most beginner friendly vape pens we’ve come across. Other starter pens require you to do all sorts of tasks that are more advanced. With this pen, you don’t have to deal with any of that.

The tank is built into the base of the pen, so you have nothing to worry about there. Most pens have a detachable tank, which is great for getting into advanced things or if you want to switch tanks. But if you just want to get started vaping as seamlessly as possible, this is the pen to get.

With the built in tank, you also don’t have to worry about breaking the glass. Most pens have exposed glass tanks. They even will send a thick rubber band with their kits. The rubber band is supposed to go around the outside of the glass tank in an effort to protect it. Well with the eGo AIO, that will be the furthest thing on your mind. All you’ll have to worry about is the four skills we mentioned above: charge, fill, fire, and vape.

The rubber band is supposed to go around the outside of the glass tank in an effort to protect it. Well with the eGo AIO, that will be the furthest thing on your mind. All you’ll have to worry about is the four skills we mentioned above: charge, fill, fire, and vape.

If you’re ready to join the vaping community, click here to get the best price on the eGO AIO complete kit.

Get The Best Price Here