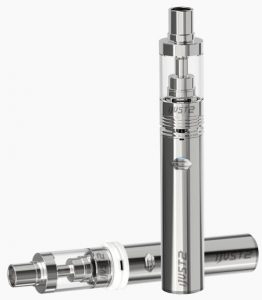 Let’s get straight to the point, the Eleaf iJust 2 is a solid device.

It’s well built and will have you chucking clouds for quite a while. The iJust 2 is an affordable vape pen that is perfect for the vaper that doesn’t want too many confusing features.

The performance is pretty awesome. It produces impressive clouds, especially for a grab and go starter kit. You can pick one up for just $34.95 and get start vaping on it with ease.

The Eleaf iJust 2 is a sleek device that caught me off guard. I wasn’t expecting it to perform as well as it does. Since it’s only $34.95, I was expecting it to give off a semi-cheap vape pen quality vapor.

There’s nothing wrong with inexpensive vape pens, but I can definitely notice the difference in the vapor production. Cheaper pens produce vapor that gets the job done.

Their vapor is often good but not great. If you’ve never experienced great vaper, you’ll love the starter pens.

That’s just not the case with the iJust 2. It produces great vapor. The clouds are nice and dense, great for vape tricks. It definitely airs on the side of cloud chasing. The flavor is good, but not great. If I had to categorize this pen, I would call it a cloud chasing pen. It can really chuck some massive clouds.

It has a one button design which makes it extremely easy to use. It would make a great gift for a new vaper but the clouds might be a little too much with this sub ohm tank. Regardless, it’s easy to use which is why I’d recommend it to beginner vapers.

The tank on the iJust 2 is really what sets it apart from other starter kits in its price range. As I mentioned above, it throws out some massive clouds. You could put this tank on a lot of different mods an it will still perform like a beast. It’s 22mm wide so it will fit nicely on most mods.

It comes with one sub ohm coil. The preinstalled coil is 0.3ohm dual coil. That’s why it’s able to produce massive clouds. There is also a lot of cotton in the coil head. Very nicely designed. Eleaf recommends vaping on the 0.3ohm coil anywhere from 30W – 80W. With this kit you won’t have to worry about adjusting and optimizing the wattage for the coil. They’ve already done that for you.

When you buy the iJust 2, you can add some other Eleaf EC coils to your cart. If you’re just now making your foray into sub ohm vaping, the 0.5ohm coils might be a good start. The 0.3ohm preinstalled coil might kick your a**.

The only caveat about the tank is the adjustable airflow. It’s kind of weird. It has a nice big open airflow, but it’s not adjustable without an external band. They include an airflow band with the kit.

Bottom-fill tanks are not first preference but for the price I can’t complain.

The battery is a perfect match for the tank. It packs 2,600mAh of power and fires the tank up nicely.

It stands 81mm tall and is constructed out of stainless steel, just like the tank. The one button design makes it extremely easy to operate while the stainless steel makes it durable.

The battery has already been optimized for the iJust 2 tank, so you don’t have to worry about tweaking the wattage. It does not have variable wattage functionality. It’s a no frills plug-n-play setup.

Eleaf really focused on making this kit easy to use. It’s nice that they also made it perform like a monster. This kit operates like a beginner device but performs like an intermediate device. It’s a good deal.

The Eleaf iJust2 is a pretty cool little device that performs above its cost.

It would make for a good grab and go vape because it’s easy to use, has a big battery, and a large tank capacity. It also would make a great gift for a new vaper or an older vaper. Anyone who would like a simplistic vaping experience would appreciate this setup.

For the price, you can’t beat it. This is a great deal and it comes with everything you need to get started vaping with the exception of vape juice.

The Eleaf iJust2 definitely gets our seal of approval. Click Here to get the best price.