Just How Does Vaping Work Anyway

The way a vaporizer works is simple. It doesn’t matter what you’re vaping, they all work in a similar manner. They heat up a compound (e-liquid, dry material, oil, etc) until it turns into vapor. The specifics vary depending on the device you’re using or what you’re vaping, but the basic concept remains the same. Heat a compound until vapor is produced.

The main reasons people vape is to deliver nicotine or for the therapeutic effects of marijuana. Vaporizers for the two respective substances are very different. Weed devices usually contain a chamber and are heated by convection. E-liquid devices have a coil and heat the liquid through direct contact. Some dry herb vaporizers work similarly to e-liquid devices, but I’m not a big fan of those. 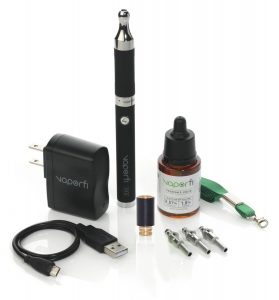 Every mod or ecig has a heating element. In e-liquid vaporizers, we call this the atomizer. The job of the atomizer is to heat the coil to a specific point, predetermined by the settings of the device. Some devices only have one mode or setting while others have variable wattage (VW), variable voltage (VV), or temperature control (TC) modes. No matter which type of e-liquid device you’re using, it’ll work by heating up a coil.

The coil is wrapped around a wick, which is usually made out of cotton or silica. Wicks have one job, to soak up as much e-liquid as possible and deliver it to the coil. Once a wick is fully saturated with e-liquid, it is ready to take on the heat from the coil.

The coil receives a steady flow of electricity from the battery and turns orange hot. As it reaches the desired temperature, the e-liquid begins to mix with the air and turn into vapor. This vapor is then inhaled by the user and delivers nicotine to the body without thousands of chemicals. A lot of times it may take a puff or two before the coil reaches it’s proper temperature. Once it does, a lot more vapor will come off the coil.

As you keep vaping, the e-liquid will disappear from your tank. If you vape too much without refilling the tank, you’ll destroy the cotton. When the cotton is heated by the coil and it’s not completely saturated with liquid, it will actually burn. You’ll taste it. It tastes horrid, so just don’t do this! Once you’ve burned the cotton, there’s no going back. You’ll have to replace it. Technically the wick will still work, but it will give off a burnt taste for the remainder of its life. Unless you’re into charred tasting e-liquid, it’d be best to change the cotton/coil right after you burn it.

Most tanks allow you to buy coil replacements, but advanced devices require you to build the coil and wick it yourself. These “tanks” are called RBAs, RTAs, RDAs, and RDTAs.

When your device heats up a compound through direct contact, it’s a conduction vaporizer. In my opinion, these are not as good as their counterpart.

One of the biggest downsides to conduction is that it doesn’t heat up the dry material or wax evenly. The part of the material that is in direct contact with the heating element will absorb the lion’s share of the heat. If you just keep vaping without moving the material around, you’re at risk of combustion and producing smoke rather than vapor. Vapor is much smoother an cleaner than smoke, and it also tastes better. Also, the smell doesn’t stick around very much at all when you vape dry materials.

You know how smoking is, so theres no need to dive into it much further. I’ll summarize it quickly. The smell sticks around forever, you breathe in soot (carbon), and it’s a lot harsher on your throat.

Even with the shortcomings of conduction vape devices, there’s no shortage of them. The first devices made were this type, which means the technology is older and devices are cheaper. In a cost driven world, cheaper things tend to stick around for a long time until the newer and better alternatives can be purchased by the masses. If you can afford it, go with a good convection model.

This type of device usually has a chamber that houses the dry material or oil. The chamber is heated up to a specific temperature and vaporizes the essential oils out of the material. These are so much more efficient than conduction devices because they heat the compound evenly.

Think of these as mini convection ovens. Would you rather heat your pizza by sitting it directly on the eye of an electric stover, or putting it in the oven? If it was directly on the eye, you’d have to keep moving it around until you’ve heated the whole thing. That’s exactly what you have to do with conduction devices. But if you were to put your pizza in the oven, it would heat evenly and efficiently.

Since the temperature is preset and the heating element isn’t in direct contact with the dry material or wax, there isn’t much risk of combustion. 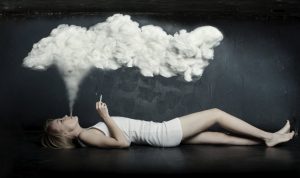 The thing that separates vaping from smoking is that it doesn’t heat up a compound to the point of combustion. Smoking however, does in fact heat up a compound until it is combusted. The byproduct of the combustion contains a bunch of harmful chemicals. One of the most harmful compounds produced from cigarettes is tar, because it sticks to your lungs and anything else it comes in contact with. As it sticks to your lungs, it allows other chemicals, mixed in the tar, ample time to absorb into your body.