After years of propaganda getting you addicted to nicotine, a chemical that is obviously harmful to you, you’re probably wondering “is vaping safe?” When the food, water, medicine, and cosmetics we use on a daily basis saturate in chemicals, it’s hard to trust that vaping is a healthier alternative to smoking. Like smoking hooka, vaping has become a social activity for younger generations. Older generations typically think of it as an easier way to quit smoking, rather than a new hobby to pick up. Something to ween you off of nicotine, rather than something you work to develop a tolerance for so it becomes enjoyable for you. While younger generations are interested in trying all the different e-juices out there and collecting rare tanks, their parents are asking “is vaping safe?”

New parents are wondering if they should switch to vaping around their baby, rather than trying to quit smoking altogether. Chain smokers are trying to wean off of nicotine using vaping as an alternative. Let me set the record straight and answer the question we’ve all been asking “is vaping safe?”

Since 2009, FDA has pointed out that e-cigarettes contain “detectable levels of known carcinogens and toxic chemicals to which users could be exposed.” An example, e-cigarette cartridges marketed as “tobacco-free” actually contain antifreeze, tobacco-specific compounds that have been shown to cause cancer in humans, and other toxic tobacco-specific impurities. Another study found formaldehyde, a chemical known to cause cancer, in 42 difference vaping cartridges.
Formaldehyde is a colorless, strong-smelling chemical used in building materials, household products, and as a preservative on foods and dead bodies. It is most dangerous when absorbed as a vapor or gas. So there’s that.

Now on the other end of the stick, the body’s reaction to most of the chemicals in traditional cigarettes cause long-lasting inflammation, chronic diseases like bronchitis, emphysema, lunch disease, and heart disease. E-cigarettes also contain some of the most toxic chemicals, so there is no real correlation with switching to e-cigarettes and improved health. Most likely smoking an E-cigarette will not significantly reduce any of the risks for chronic diseases.

There aren’t any long-term studies to support health benefits of inhaling e-cigarette vapor over traditional smoke. E-cigarettes were very recently introduced in the United States, while cancer usually goes undetected for years before treatment or studies can take place. With today’s technology, it still takes at least 15-20 years of using a product before a risk of cancer can be measured. Hardly any info is available about the long-term health effects of e-cigarettes, and there aren’t any quality, time-tested studies asking “is vaping safe?” 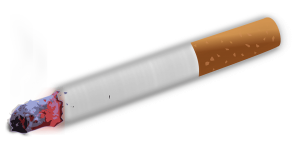 u’re probably wondering why I addressed e-cigarettes in the health section above rather than vapes when you’re asking “is vaping safe?” But here’s the thing, with cigarettes nicotine gets released by burning tobacco which gives you a buzz and has dopamine to lift your mood. Vaping doesn’t burn tobacco; it just heats it to a controlled temperature. Generally speaking, vaping is “90% healthier than smoking” according to studies done in the US & UK (http://www.cdc.gov/mmwr/preview/mmwrhtml/mm6414a3.htm). You just have to be careful you’re not ingesting certain chemicals like propylene glycol which manufacturers are now adding to e-juices to get different effects which cigarettes don’t offer. Vape juice is only thought to be dangerous when used improperly (through oral consumption or when used in marijuana bowls).

It’s hard to define which flavors are safe to vape because it’s a relatively young market. When we ask “is vaping safe?” we have two things to consider.

1. How are we defining safe?
The same types of companies that are putting GMOs in food, fluoride in water, and parabens in cosmetics are likely to put dangerous chemicals in e-juices. If that bothers you, you just have to cautiously read the labels and figure out which juices are harmful and which one are not. You just have to be careful which e-liquids you’re vaping because just like for, they contain chemicals that prevent them from molding. There isn’t a ton of regulation on additives in vape liquids so you’ve just gotta be careful.

2. Water Vapor vs. Carcinogens
The nicotine in a cigarette activates by heating the particles with fire so that they transform from a solid into a vapor state. Those particles are absorbed into your bloodstream through the lungs causing the brain to release dopamine. Smoking cigarettes will leave tar in your body, blacken your teeth, constrict your blood vessels, cause your heart rate to increase, has cancer causing effects, and destroys your taste buds. Vaping heats the nicotine in a gas or metal chamber fast enough to become aerosolized without creating a combustion reaction. You’ll get the same 6-second hit without the damage of smoke inhalation. Vapers inhale much less smoke, period.

The difference between traditional cigarettes and e-cigarettes is that e-cigarettes don’t contain tobacco. In another article, I talk about why e-cigarettes are disgusting, but for practicality sake, I guess they’re better than the real thing. It isn’t the tobacco in cigarettes that causes cancer, Cubans have been smoking cigars for ages and have a low cancer rate compared to Americans. It’s the laundry list of chemicals that are in the cigarette wrappers, and e-cigarettes have some of these same chemicals.

Vapes, on the other hand, are in an entirely different arena. Sure nicotine is still nicotine, and e-juices have chemicals like the chemicals in the processed foods we eat. But overall, vaping is one of the safest alternatives for nicotine and marijuana smokers in my experience.

So when you’re wondering “is vaping safe?” You probably mean
“…is vaping safe as an alternative to smoking cigarettes?” For me, the answer is definitely, yes! When trying to lose weight you have to take baby steps to make a permanent change. You have to start by changing your portion size, and reducing your dairy intake. If you try to go raw vegan the first day, you’ll likely relapse. I look at this just the same. Burning a cigarette wrapper seems to be the most dangerous part of smoking. Sure vaping isn’t as healthy as quitting smoking altogether, but it’s a great start and a fun hobby.