Amount of Nicotine In One Cigarette

Without nicotine, cigarettes would not be as widely smoked as they are today. Nicotine is the compound in cigarettes that keep us coming back for more. 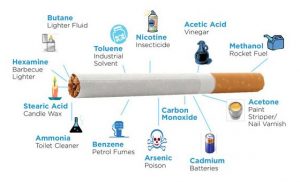 Nicotine is not an unnatural chemical. It is produced by tobacco plants to help repel insects. Nicotine acts as a neurotoxin to bugs (1). It keeps bugs from destroying tobacco plants. While nicotine may be toxic to insects, it gives a pleasant and stimulating feeling to humans.

Your brain loves the feeling it gets from nicotine and will eventually begin to crave it. Of course, your brain isn’t craving any of the other crazy chemicals in cigarettes like formaldehyde, tar, or carbon monoxide.

How Much Nicotine Is In One Cigarette

In the states, most cigarettes have roughly 9 to 12mg of nicotine. However, your body absorbs less than 1mg (CDC).

Smoking is an inefficient way to deliver nicotine to your body. Most of it is burned off into the atmosphere instead of being ingested by your body. This presents a major problem for smokers.

If nicotine was delivered efficiently, you could take one to two puffs of a cigarette and feel satisfied. But since about 90% of it doesn’t get ingested, you have to smoke more to get the satisfied feeling. This is one of the most dangerous parts about smoking.

If you are looking to quit the cigs and get your nicotine from a different source, vaping is not a bad route to go. It provides a much cleaner way to get the nicotine your body is craving.

One of the big advantages vaping has over smoking is the lack of chemicals. When you smoke, your body really just wants the nicotine but ends up with hundreds of chemicals getting absorbed into your bloodstream. That’s not the case with vaping.

Most vape juices only have four ingredients: propylene glycol (PG), vegatable glycerin (VG), diluted nicotine, and flavoring. With vaping, you won’t have to worry about ingesting several hundred chemicals. 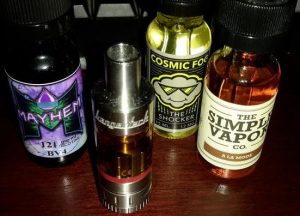 Having a wide variety in vape juice strengths to choose from is another advantage vaping provides over smoking.

While cigarettes have a standard range of nicotine, vaping has a lot of choices from low to high nicotine strengths. This allows you to work your way down the nicotine ladder, and maybe eventually transition to nicotine free vaping.

If you are a heavy smoker, consider starting with 12mg vape liquid. If that is not enough to satisfy your cravings, you can always get a stronger bottle.

You don’t want to start with a super strong bottle of e-liquid because it could deliver more nicotine than your old cigarettes delivered. This would worsen your body’s need for nicotine.

If you smoke less than a pack a day, then consider starting with a 6mg nicotine vape juice. It should get the job done but if it doesn’t you can always move up to 12 nic. Click here to browse some of the cheaper vape pens that we have vetted.

How Cigarettes Deliver Nicotine To Your Body

Let’s take a look at how the nicotine is delivered to your body. It is well known that cigarettes have hundreds of strange ingredients. One of those odd ingredients happen to be tar. Have you ever wondered why they put tar in cigarettes? I know I have.

The purpose of tar in cigarettes is to act as transporter. It essentially plays the roll of an airplane. A bunch of the other chemicals hop in the tar airplane and get ready to head to their destination, your lungs. Among the passengers is our friend, Mr. Nicotine.

The ones that crash into your lungs have no way out, so they decide to stay a while. Mr. Nicotine and his chemical buddies hop out and get ingested by your body. While the small amount of nicotine that is ingested from one cigarette is not enough to cause permanent damage, but the tar builds up over time and can cause catastrophic damage (2).

That, my friends, is the ingenious way that cigarettes are designed to deliver nicotine to your body.

The Dangers of Tar Buildup

Now that you know how much nicotine is in the average cigarette in the US and how it’s delivered, let’s take a deeper look at the tar in your lungs.

In this case, it’s your lungs tissue. As the tar coat gets thicker and thicker, your lung tissue will start to die. The more tissue cells die, the more at risk you become for other ailments.

Dead lung tissue can contribute to a host of illnesses, including smokers cough and lung cancer.