If you're looking for a hot new tank to try, then this could be the one.

Maybe this one will take the cake as the 2017 cloud champion. The OBS V is another one of these super sub ohm tanks that is capable of fogging up a room. Any top cloud chasing tank should be able to do this.

If that is your thing, then this is a tank that would be worth giving a rip. If it's not your style, then you'd fair better with some of the other new tank releases of 2017. 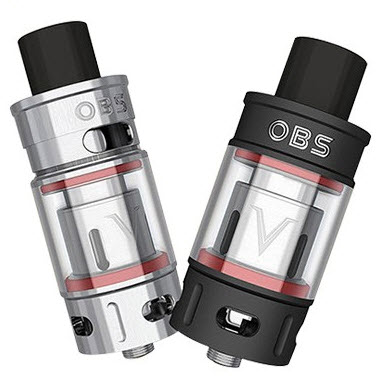 The OBS V kit comes with three coils, a user's manual, a spare glass tube, a really weird drip tip, a wide bore drip tip, and of course, the tank.

The three coil heads it comes with have four, eight, and 12 coils inside them. Sounds a lot like another tank I know of.

One thing that is unique about this tank is the uber long drip tip that comes with it. It looks like something Willy Wonka might use on his favorite tank. It just looks downright goofy! But honestly, it does have a practical purpose. When you're vaping at crazy-high wattages, the drip tip and vapor can get piping hot. With the long drip tip, it'll give the vapor a little time to cool down and it won't get so hot.

There's also a downside to the long drip tip. The further away your mouth is from where the vapor is produced, the more time the vapor has to dissipate. It's kind of like taking two steps forward and a half step backwards when you use the Willy Wonka drip tip. 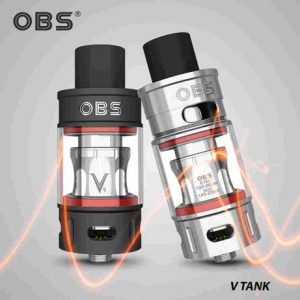 It's painstakingly obvious that the OBS V was created to compete with the SMOK super sub ohm tanks. Given that this kit comes with a V12 coil, it seems like they are trying to go toe to toe with one of the most innovative companies in the vaping industry.

This tank comes with a V4, V8, and a V12 coil. It doesn't come with an RBA base but by the time you're reading this, hopefully you'll be able to order it separately.

You can also buy a V10 coil seperately. That's an interesting move so we'll have to try it out. You would think anyone who is into vaping on a ton of coils would just use the V12, but maybe the V10 is better in some ways. If it wasn't, I'm not sure why they wouldn't have killed in before it hit the production line.

This is probably the coolest thing about the OBS V tank. We've already used a 12 coil tank so that's not all that exciting anymore. But the fact that you can use the TFV8 coils in this tank is pretty awesome. You can even use the RBA base in it. Since the standard kit doesn't come with an RBA base, it's nice to be able to plop in the TFV8 RBA base if you already own it.

The OBS V is a nice tank with some cool features. The side-filling system is awesome and innovative. Creating a system that is compatible with the TFV8 is also pretty cool. Even though this tank was clearly modeled after the SMOK's tanks, it does have a couple unique features.

Once the tank is in the hands of the masses, we'll be able to see how it stacks up against its daddy. But for now, the OBS V is tip toeing in the shadows of the SMOK TFV12 and TFV8, but time will tell who the real king is.