The juice you vape has everything to do with whether you become a successful vaper or not. 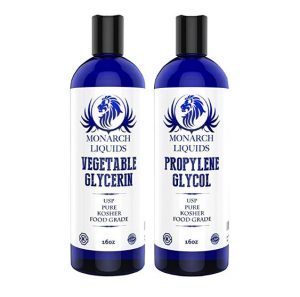 Success is relative, and it depends on why you started vaping in the first place. Most people start vaping because they are looking to kick cigarettes to the curb. Other people start vaping to enjoy the flavors. The last major subgroup of vapers are the cloud chasers. Depending on which category you fall under will determine what you consider to be success.

No matter which kind of vaper you are, you could benefit by knowing how PG (propylene glycol) and VG (vegetable glycerin) effect your vapor. You don’t have to go bizerk and start buying textbooks on them, but just learning a little bit about each of them will go a long way.

It’ll be a lot easier to achieve your goal when you know what you’re working with.

Differences Between PG and VG

When I first started vaping, I was surprised to learn about all the differences between PG and VG liquids. Ignorantly, I thought that it was only a matter of personal preference.

The first big difference is the flavor.

The flavor that these two bases carry is extremely different. PG is more or less flavorless, so it absorbs the added flavors very well. When you vape with pure pg based liquid, or a heavily pg dominant blend, you’ll taste more of what the flavor creator intended. That’s not the case with VG.

VG carries its own flavor so it doesn’t absorb the added flavors as well. You’ll notice that VG has a sweet undertone to it. This effects how the intended flavor comes off. If the artisan intended for the flavor to be sweet, it will be even sweeter in a VG e-juice.

Those are the two main differences when it comes to flavor. PG will carry the flavor well and will be pure. VG won’t carry the flavor as well and it will have a sweet undertone to it. Now let’s move on to consistency.

Originally, I didn’t think consistency mattered all that much. I learned the hard way by gunking up an atomizer. In hindsight, it was really careless of me to put a pure VG e-liquid in a starter pen but you live and you learn.

VG is very thick. It can clog up a cheap atomizer in no time. Most of your advanced vaping gear will be able to handle a pure VG based vape juice, so you won’t have to worry about it. But if you’re rocking a starter pen, then double check to see if it can handle a VG based liquid.

If it can’t and you use it anyway, it’s not a big deal. You’ll just gunk up the atomizer and it’ll start performing like crap or not at all. Atomizers are cheap so it’s not the end of the world, but it’s no point in burning money. If you have money to burn, then come party with me on Miami Beach! Or you could just keep plowing through atomizers, it’s up to you.

PG vape liquid is the opposite. It’s a lot thinner and runny. It can be used with any starter pen and more advanced devices too. You won’t have to worry about clogging up the cheaper vapes with a PG dominant e-liquid. 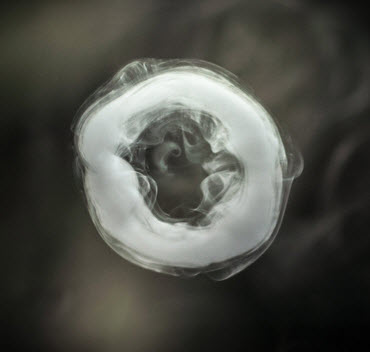 Again, the difference here is not subtle at all. If you were to do a blind test and had to figure out which e-liquid was which, the vapor production would be a dead giveaway.

VG based liquids produce much bigger and denser clouds. If you’re a cloud chaser, then a VG dominant liquid would be your best bet. You can still produce impressive clouds with a PG dominant juice, but it won’t compare to a VG juice that’s vaped at the same settings. If you’re comparing to your friends e-cig, they’ll think you’re a cloud monster.

PG based vape juices are not as dense and have a little more of an airy feel. That airiness isn’t overly dramatic, but it helps you get the full flavor. The denseness of VG liquids don’t allow the flavor to fully express itself. The flavor stays contained in the dense clouds.

As you could probably imagine, denser clouds are cooler. A nice VG based vape juice will have a denser cooler feel which a lot of people prefer. PG liquids are warmer when vaped at the same settings. The warm airiness allows a full-bodied flavor to manifest in your mouth.

If you’re using vaping as a tool to help you quit smoking, that’s awesome. You might want to reproduce a similar throat hit so you feel satisfied with each inhale. If you do wan’t to get a nice throat hit, then PG is the way to go.

PG juices have a nice throat hit. Each inhale makes its presence felt. Some people prefer for the vapor to squeak by their throat relatively unnoticed. If that’s you, then get a VG dominant vape juice. Which base you choose is not the only factor in how much of a throat hit you feel.

Lastly, these liquids also differ in how many people are allergic to them.

Now you know pretty much everything you need to know about PG and VG vape juice. Use this knowledge to propel you forward to vaping success.

If you’re transitioning from smoking, a PG dominant vape juice will provide a nice warm throat hit and it won’t overwhelm you with vapor. The cloud chasers should consider a VG dominant blend or a pure VG e-liquid. It’ll produce the biggest clouds and won’t hit your throat very hard at all. If you’re a flavor chaser, a pure PG juice would be excellent but a PG dominant blend would be good too. It’ll carry the true flavor quite nicely.

In time, I hope you play around and test out all different kinds of blends. Learning through experience is fun when it comes to vape juices.