The original G Pen has been around for years, helping aromatherapy advocates successfully get their vape on for years. 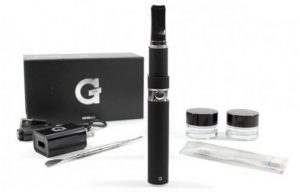 Every year, Grenco Science upgrades their original gpen with the latest technology, but the basic design remains the same. There hasn’t been any need to change it. They killed it with the original design and have been riding that wave ever since.

The Gpen is a small, portable wax vaporizer. It’s capable of efficiently vaporizing your favorite concentrate to deliver the vapor you desire. You can get some really good drags off of this compact pen. That’s one of the best things about it. It boasts a nice deep chamber and a quick heat-up time. The chamber may actually be a little too deep, but it’s definitely big enough to hold your wax.

When vaping on the G Pen, you’ll feel it hit almost immediately. It gets the job done to say the least. There’s not much more you can ask of a pen in its price range. It’s a hard hitting, affordable, compact pen. It’s very discrete as well. You’ll be able to pull it out and take a drag without causing a scene. This is the perfect pen if you are on the move and want to bring the gas with you but don’t want it to be so obvious.

It’s super easy to operate. It’s simple design makes it a breeze to get started vaping your concentrate. It doesn’t have a lot of complicated or small pieces. The vapor quality is also good and the effects are even better. Of course, the end result depends highly upon the quality of your wax. Just know that if you don’t feel it, it’s not the G Pen’s fault. It definitely holds up its end of the bargain.

The price is a huge pro. It only costs $39.95! That’s peanuts compared to some of the other wax pens out here. Also, the G Pen is backed by a one year warranty. Grenco Science stands behind this pen.

The coil is a little far down, making it somewhat difficult to load. If you buy this G Pen, you can only vape concentrates and oils. There are pens on the market that allow you to vape dry herb, concentrates, and liquids. But any pen that successfully does all of those successfully will cost a bundle, like the 7 Series. Given the affordable price tag, the cons are not bad at all.

For just under $40, you get a reliable pen made by a company who specializes in the industry. It works well and gives off some nice vapor that will achieve the desired result. It’s not the fanciest pen, but it’s a time tested pen that has won out.

The G Pen is well liked by thousands of vapers and celebrities alike. This pen gets our seal of approval based on what it has to offer combined with the ultra affordable price tag. If you’re ready to load up some wax and vape on the go, then pickup the G Pen for $39.95 from our recommended vendor.