Why Is Smoking Bad For You

Everyone on earth knows that smoking is bad for you, but people still smoke. Knowing that it's bad is not enough. If people don't know the graphic details of why it's bad, then they'll continue to smoke in droves.

Some people will smoke no matter what. They'd rather die than give up smoking. Hopefully that's the minority of people, but I'm not too sure. If we can help educate enough people about the details of the side effects of smoking, then we have a fighting chance at making a real difference.

Before actually doing the research myself, all I knew was that smoking was bad and causes lung cancer. While that is true, there's much more immediate side effects than lung cancer. If you are anything like me, you probably thought that it took years before smoking really took a toll on your health. Well that's incorrect. It effects several of the major systems in your body right away. Within minutes of lighting up a cigarette, or any form of tobacco for that matter, your health begins to degrade.

According to cardiac surgeon Dr Gopal, Minutes after you take your first draw you will be unhealthier. Your heart rate will elevate beyond your normal resting rate. Also, your arteries will constrict which decreases your circulation. Your heart will be getting less blood as well as other parts of your body.

Your arteries will become permanently damaged and will start to accumulate atheroma build up. As they become lined with fat, it increases your risk of dying from heart disease or having a heart attack (1).

Let's summarize what we've uncovered so far so we can put the pieces of the puzzle together to see just how smoking literally kills people.

It constricts your arteries while also causing permanent damage and fatty build up in your arteries. Think about that for a second. It clogs your arteries up while simultaneously shrinking them. That's horrible! It's almost as if these little cigarettes were designed to attack your cardiovascular system. But guess what? That's not all.

Tobacco also makes your blood more prone to clotting. So now you have constricted, clogging arteries, and blood that is ready to clot at any given moment. This is precisely why smoking tobacco causes 1/3 of all heart disease deaths in America (2). We have big tobacco to thank for boosting the number of Americans with heart disease to over 16 million. Without the tobacco industry, that number would be significantly lower and we could then focus our attention on healthier eating habits. If you smoke and eat a carnivorous diet, you might as well schedule your visit to the hospital. It's basically a waiting game.

It doesn't take long to get hooked on tobacco. Do you think every old fart still smoking is doing it because they logically decided smoking would be a good habit to do for decades? Hell no.

They just wanted to try it because the cool kids smoked or their favorite celebrity smoked. Nobody starts smoking because it's the best logical option for a new habit. But after smoking twice, you're hooked. This is my opinion based on my knowledge of psychology. Here's why I think just smoking twice is enough to fuel addiction.

You now identify as someone who smokes. You may not consider yourself a hardcore smoker, but smoking is now part of who you are whether it's socially or religiously.

Our brains are funny characters. There's a “glitch” in our brains called the Consistency Bias (3). It's not really a glitch, but you'll see why I called it that in a second. The Consistency Bias is when you have made a decision, good or bad, and your brain does everything in its power to keep consistent with your decision. Whether it's religion, politics, or smoking, once you've made up your mind, your brain will block out all information that could oppose your decision.

This may have been useful thousands of years ago when we needed to be mindlessly consistent to survive, but now it can also hurt us just as much as it used to help.

When you come back for that cigarette a second time, your brain will do everything in its power to stay consistent with its new identity. If you smoked with your friends twice, you can't just stop all of the sudden. You must remain consistent or you'll view yourself as a wishy-washy hypocrite. Changing your identity back to a non-smoker will take more effort than you could imagine prior to smoking, but vaping can make it a lot easier. 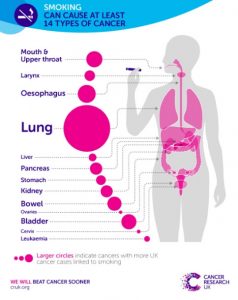 I'm sure you're familiar with some of the long term effects. These include heart disease, throat cancer, lung cancer, stomach cancer, kidney cancer, mouth cancer, and a weaker immune system. With your new weaker body, you're going to be prone to coming down with all kind of illnesses ranging from a common cold to emphysema and cancer.

Everyone's body has cancer cells, and one or two cancer cells won't kill you. With a healthy immune system, your body will be able to fight back against the cancer cells before they spread. Smoking diminishes your body's chance at fighting back. But that's just one way smoking affects your likeliness of getting cancer. It actually does a lot more to contribute to getting cancer.

It is such a huge contributor to cancer rates because smoking damages your DNA. Certain genes are in your body for the purpose of cancer prevention and protection. When the chemicals in cigarettes damage those genes, your chance of getting cancer goes through the roof (3).

The thousands of chemicals in cigarettes work together to destroy your health. Some of them make it harder for your cells to repair themselves while others are damaging the cells. Tobacco is just one of those things you don't want to smoke. Nothing good can come from it as far as your health is concerned.