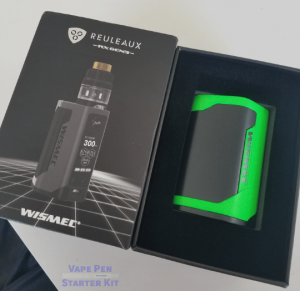 The RX Gen3 is the newest 300W mod in the Reuleaux lineup. Very few vapers actually push these mods to their limits, which is why the design for this mod is pretty sweet. The way they designed it removes a lot of the drawbacks of previous 300W mods and just makes sense. It still has the drawbacks of an uncentered 510 pin, so tanks larger than 25mm will hangover.

My favorite thing about this mod is the size and how it feels in your hand. It's incredibly small for a 300W mod, and even small for a triple 18650 device. My least favorite thing is how hot the top cap can get when vaping near the upper end of the range on the triple coil. I think that's why they included two drip tips. More on that later.

But overall, I am really liking this kit. The size, the feel, and the flavor are all fantastic. If you want a mod that can go up to 300W without having to carry around a brick, this is by far the best option on the market right now.

Reading a review or watching a YouTube video are great ways to learn about devices, but when you finally get the damn plastic off and open the box, your senses will form their own opinion. I was taken aback by the RX GEN3 when I first opened the box. I knew it was going to be small, but I was still shocked by the size. Seeing a compact Reuleaux, shorter than my palm is wide, and knowing that it can kick out 300W just didn't seem like reality for a few seconds. The mod itself is sleek and sexy and feels great in my hand. Without the batteries, it's super light.

The mod definitely had the wow factor for me, but the tank did not. My first impression of the tank was, it's another run of the mill tank. When I put it on my mod I thought the tinted glass and black on the tank looked pretty sick with the black accents on my lime green mod. Together, they look damn sexy. But the tank by itself is just another tank to me.

Who The GEN3 Is For

The RX GEN3 is the start of the show. Not too many people are going to buy this kit because they're in love with the tank and could use another mod. It's the opposite. The mod is easy to fall in love with, and it doesn't hurt to have another good tank. If you're in the market for a new mod, then this kit might be for you. But it's definitely not for beginners. If you have never vaped before, stay away from it. Learning battery safety and how to use a powerful device is a lot to take on at once. Sounds like an accident waiting to happen.

Any intermediate or advanced vaper would be a great fit for this kit as long as you aren't looking for a feather light mod. Any mod with three cells is going to have some weight to it. In my opinion, this kit is best for people who usually vape at medium wattages but might want to crank out some crazy wattages every now and then. If you're the vaper who vapes consistently above 200W, get a good life insurance policy and a quad 18650 mod. Your batteries will die too fast in a three cell mod.

To sum it up, if you are at least an intermediate vaper and vape like a normal human being at low to medium wattages, then this kit is one that could be a good fit for you.

The RX GEN3's predecessor, the RX300, was a huge mod coming with all the drawbacks we've come to expect from these powerful 300W clunkers. It was humongous, heavy like a brick, and fit awkwardly in your hand unless you're a professional basketball player. It needed four high-rate (25A+) 18650s, which of course contributed heavily to the weight.

That's what we've come to expect from these 300W giants… but apparently they don't have to be such clunky machines.

The brilliance with the new, much welcomed design starts with the size. While most 300W mods could be effectively used to replace a missing brick in a building, the RX GEN 3 has a much smaller body. It weighs in at 145g (197.7g with tank), which Wismec proudly lists at the top of the spec sheet on their website. The RX300 tipped the scale at 256g, making it 77% heaver than it's successor. It's 3g lighter and 15mm shorter than the RX200 as well. It's a triple 18650 device, which is one cell less than most mods with such power. Are you starting to see the brilliance in the design yet? 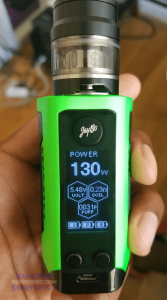 blew through the 2ml version of the tank in 31 puffs

Let me paint the picture. This design is so genius because of the way most people vape. There's a relatively small group of advanced (or crazy) vapers who can consistently chuck clouds at 300W like a iron lunged champion. Most of our lungs are made out of soft tissue so we don't vape up there very often, but may want to chuck a few clouds at 300W every now and then for shits and giggles.

For anyone who doesn't consistently vape north of 200W, having a big quad 18650 brick-like device just isn't practical. Carrying around a monster like that just to vape at 80W would be awkward. That's where the RX GEN3 comes into play.

It has one less cell, which means you can't vape at 300W as long as you could on other devices. But most people don't chain vape at 300W anyway, making the 4th cell an unnecessary novelty item for most vapers. After connecting the dots and making this realization, Wismec released a device that's smaller than a lot of 200W mods but can crank out 300W of power. Brilliant.

With removing all of the normal drawbacks of a 300W mod, it makes the GEN3 the clear cut 300W choice for many vapers. That, my friend, is genius. 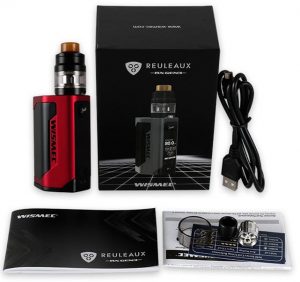 The chip in the RX GEN3 offers the typical functionality and consistency that we've come to expect from Wismec chipsets. I feel like their chips got a lot better ever since the RX200s. The RX GEN3 has all the normal modes like variable wattage, temperature control, and TCR mode.

Overall, the RX GEN3 performs excellently and is a breath of fresh air from the enormous 300W mods that preceded it. It fires almost instantly and has not gotten hot on me yet. It has nice vents on the sides and bottom of the mod.

Even though I was not all that impressed by the appearance of the tank when I first opened the box, I must say that it did perform pretty nicely. It gives off great flavor and pretty big clouds with the triple 0.2ohm coil. And it has not leaked at all. It hasn't even thought about leaking on me. I took the silicone plug out so I can now fill it with 4mL of liquid, which is nice. I blew through my liquid when I had only 2mL in their, but I was vaping at 130W which I normally stay below.

All in all, the size, the consistency, and the sheer power make the RX GEN3 a solid pick for you if you're in the market for a new and powerful mod.

By far, the biggest problem with the RX GEN3 is that the 510 pin isn't centered. Some people hate centered 510 pins because you have to tilt the device more to vape it, but it could have made sense with this mod given the power. A centered 510 would have allowed this mod to handle large attys without the much hated hangover, but the mod itself would have had to be bigger, defeating the whole purpose of this mod. But if you're a stickler about even Steven, then you'll have to stick with your smaller attys on this tiny beast or pass it up all together.

The only thing that actually annoys the sh*t out of me personally is the black delrin drip tip. I love how it looks and I love how long it is. I have big lips so I like a longer drip tip so my lips don't touch the top cap. But when I use the black one, I can't slide the top cap to refill the tank. You have to take it off or pull it out a little, then slide the top cap to refill it. The tank can get hot at higher wattages. Too hot to take the drip tip off. So I would have to wait for it to cool, then take the drip tip off. I'm going to just file the bottom of it down to the same size as the ultem drip tip to work around this issue.

Also, the tank does gap a little. I really don't care because you can't see it unless you get eye level with the gap and look for it. But I know this will piss some people off. Other than that, there isn't much else to gripe about for me. Time will tell if there are any weird quirks, but as of now it's looking sexy and vaping great. 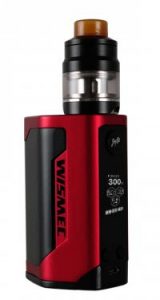 This is, without question, one of the best deals you can get right now. You probably won't vape above 200W all that much, which is why I love the fact that they didn't make this another four-cell gargantuan mod. The size is the main thing that really sets this mod apart from similarly powder mods and why I would pick it over others in the same class.

Getting the size of a 200W mod, the power of a 300W beast, a sub-ohm tank, and the consistent performance that Wismec is known for, all for under $70 makes this one of the best deals around.

If you're a beginner, this mod might be a little too advanced for you. Don't let the size fool you, it's an extremely powerful device and you need to know what you're doing. But if you're an advanced vaper and are looking for your next mod, this is a stellar pick.

You can get it for 12% off the already low price when you use the coupon 12URVAPIN. Head on over to Urvapin to get it for just $64.89 (don't forget the coupon) while it's still in stock.